From "Turnover Chains" to Twirking in lockerrooms-you probably thought you had seen it all this season as teams wound their way through the bowl season and College Football Playoffs. That was, however, until the final play of the 2018 National College Football National Championship game. Kendrick Lamar wasn't the only one lighting up the stage at Mercedes Benz Stadium in Atlanta on Monday night. Alabama's Tua Tagovailoa lit up the crowd as he hurled a 41 yard strike to #6 DeV 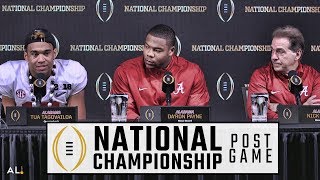