Five Charlotte Hornets scored in double figures, including Malik Monk, who scored 12 points in the fourth quarter to send the New York Knicks to its 10th straight loss at the Spectrum Center on Monday night, 101-92. "He was big for us in that fourth quarter," said coach James Borrego. "He couldn't make a shot tonight, probably until the fourth quarter and Monk was a big part of that." Hornets guard Tony Parker finished with with 15 points in tonight's contest. Willy Hernangom 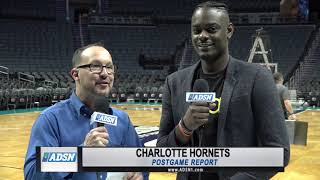 The Charlotte Hornets will look to keep pace on a tightly contested Eastern Conference playoff race when they host the New York Knicks at Spectrum Center on Monday night. The Knicks (10-38) have lost nine of its last 10 games and 17 of its last 18 games. New York's problems stem from their inability to stop teams from scoring.The Knicks are currently tied for 29th by giving 115.5 points per contest along with being 28th allow opponents to shoot 47.6 percent from the floor and

Charlotte Hornets guard Kemba Walker will start for the Eastern Conference in the 2019 NBA All-Star Game which will take place on his home court at Spectrum Center in February, the league announced Thursday. This marks Walker’s third consecutive NBA All-Star selection and his first as a starter. Walker is the third Hornet player to start an All-Star Game joining Larry Johnson (1993) and Eddie Jones (2000). He also joins Glen Rice as the only players to represent Charlotte in

The Charlotte Hornets will look to avenge a loss to the Indiana Pacers earlier in the week when they hook up with the Memphis Grizzlies at FedExForum on Wednesday night. Memphis (19-28) has fallen on hard times recently having lost 17 of its last 20 games. They have the second-worst record in the Western Conference, ahead of only the Phoenix Suns. "We have nobody coming in the door tomorrow that's going to change what we're doing," said Memphis guard Mike Conley. "We need eve

Charlotte centers Willy Hernangomez and Bismack Biyombo combined to score 20 points and grab 26 rebounds as the Hornets' extended its winning streak to three games following a 135-115 win over the Phoenix Suns at Spectrum Center on Saturday night. "I think Biz (Biyombo) was really big for us defensively on the board, he really anchored our defense," said coach James Borrego. "That's why he's been in this league so long, he's a presence at the rim, he's a presence at the board 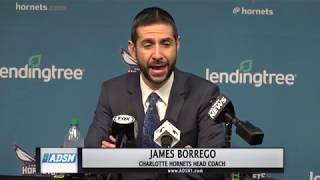 On a night when the starters could not wake up, Hornets head coach James Borrego turned to his youngsters off the bench for defense and energy. He got just the kind of result he was hoping for. Thanks to a bench unit that scored 60 of the team’s 114 points, the Hornets were able to pick up their second straight victory, a 114-95 win over the Sacramento Kings Thursday at the Spectrum Center. The keys to the victory came from forwards Miles Bridges and Michael Kidd-Gilchrist, 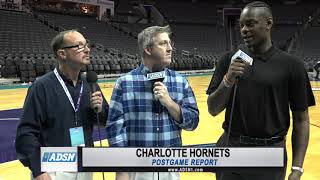 After spending nearly two weeks on the road, the Charlotte Hornets return home to begin a brief homestand against the Sacramento Kings on Thursday night. Charlotte's road trip ended on Monday and culminated with a 2-4 record. Coach James Borrego said he was confident after watching his team battle some of the league's toughest competition on West Coast. Charlotte (20-23) won at Western Conference cellar-dweller Phoenix and finished the trip with a win at San Antonio. The only

The Charlotte Hornets will have to contend with one of the toughest backcourts in the league when they face the Portland Trail Blazers on Friday night. Damian Lillard and CJ McCollum combine to average nearly 47 points a game. Hornets' guard Kemba Walker, who's having one of his best seasons, is averaging 25 points a game. He's a good dude," McCollum said. "He plays well, he plays hard, he does things the right way. He's having an All-Star season." Portland (25-17) is playing

In a statement on Friday, the Carolina Panthers announced Linebacker Luke Kuechly had been named to the Associated Press All-Pro First Team. Kuechly's 130 tackles ranks eighth in the NFL this season. His 2018 campaign also included two forced fumbles, one interception, one fumble recovery and 20 tackles for loss (3rd in NFL/most by any Panthers player all-time). Kuechly's fifth career AP All-Pro First Team honor is part of a long list of accomplishments which include a care

Hornets Lose Will to Win (VIDEO)

Prior to taking the court for their matchup with the Hornets Wednesday, the Mavericks were turning heads of fans in the tunnel with their joking and playful demeanor, an attitude hardly befitting a team that came into the game with a league-worst 2-16 road record this season. When the two teams did take the court, the Hornets turned out to be the joke, as the Mavericks cruised to a 122-84 victory on Wednesday at the Spectrum Center. It was over early. 10 3-pointers and 42